B12 is an essential vitamin. But some people have difficulty absorbing it into their body and need supplementary B12. Here are the facts about vitamin B12 … why it is vital … where you get it from … how much you need … what a lack of B12 does to your body … how to treat a deficiency 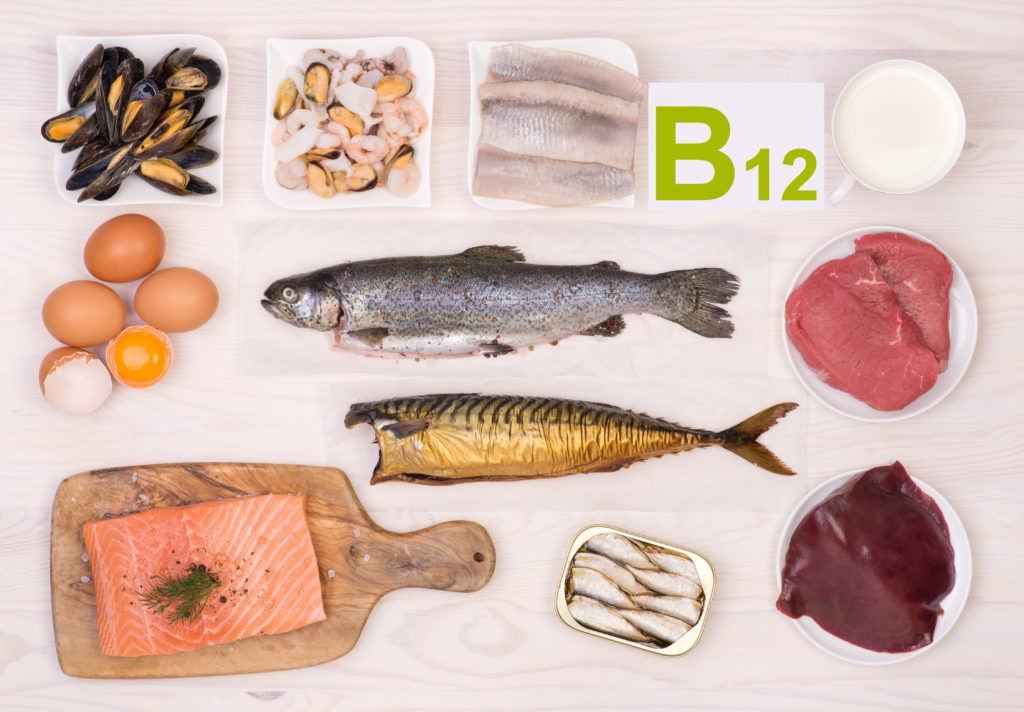 B12 is a weird vitamin with a unique chemical structure. Your body manufactures very little itself and your only major source is from eating animal protein, ie meat and fish.

Yet vitamin B12 is essential for healthy cells and a healthy nervous system.

A study published in the American Journal of Clinical Nutrition (AJCN) in 2009 indicates that approximately 6% of all persons aged 60 or more in Europe and North America are deficient in vitamin B12. The study also shows that this deficiency increases as we get older.

By contrast another study published in the same year in the Journal of the American Board of Family Medicine (JABFM) found that the rate of vitamin B12 deficiency amongst diabetics in Europe and North America averages 22% … more than three-and-a-half-times the overall average rate.

This study in the JABFM also showed that the deficiency was highest amongst diabetics who used Metformin to control their blood glucose levels.

In developing countries, according to the study in the AJCN, a deficiency in vitamin B12 is much more common and starts earlier in life. It gets worse as the patient ages.

Low consumption of animal flesh (meat and fish) is considered the main cause. Indeed in countries where a vegetarian diet is the norm, more than two-thirds of the population are deficient in B12.

In addition, in older persons, poor absorption during digestion is considered the predominant cause of the deficiency.

So, if you are diabetic, a vegetarian or elderly, it is essential to get your vitamin B12 levels checked regularly.

A simple blood test does the trick. Your levels should be between 191 and 663 pg/mL (picogram per millilitre … a picogram is one trillionth of a gram). This measures the amount of vitamin B12 in your bloodstream, ie the amount after digestion that has been absorbed into your body.

Why vitamin B12 is vital

There are two reasons why vitamin B12 is vital:

[1] It is essential because it is needed to assist folate in making DNA (deoxyribonucleic acid) and RNA (ribonucleic acid), which carry and transmit genetic information of every living cell.

Genetic information tells a cell how to function. This information must be passed along to the new cell each time a cell divides.

[2] Vitamin B12 also has a function in the production of myelin, which covers and protects nerve fibres. Without enough B12, the myelin sheath does not form properly or remain healthy.

How your body gets and uses vitamin B12

B12 … aka cyanocobalamin or cobalamin … is unique among vitamins.

This vitamin is water soluble and has a more complex chemical structure than all other vitamins, including those of the B complex. And it is the only vitamin to contain an inorganic element (cobalt) as an integral part of its makeup.

Only bacteria and microorganisms can make vitamin B12.

Bacteria in the intestines make some vitamin B12 but far, far less than the amount you need every day. Thus the only way to get enough B12 is to eat the foods that contain it or to take supplements.

Bacteria are also at work in animals creating vitamin B12. Hence it is found in a wide variety of foods made from animals. The vitamin is added to some processed foodstuffs. Plant foods do not contain any vitamin B12 unless they have been fortified.

Here are the main food sources of vitamin B12:

But ingesting enough vitamin B12 is not sufficient. Your body also needs to be able to use it.

The absorption of vitamin B12 from the food you eat is a two-step process:

Firstly, your stomach acid has to separate the B12 from the protein to which it is attached in the food you swallow.

Then the B12 has to combine with intrinsic factor, another protein made by the stomach, so that it can be absorbed into your body.

If you body is unable to produce intrinsic factor, you will be unable to absorb vitamin B12 and will end up with pernicious anaemia (a lack of healthy red blood cells). The only solution will be to have regular injections of B12.

How much vitamin B12 do you need?

The recommended amount of vitamin B12 you should get is 2.4 micrograms (mcg) a day for adults, 2.6mcg a day for pregnant women, and 2.8mcg for women who are breast-feeding.

The typical American or European diet provides anywhere from 7 to 30mcg of B12, well in excess of your daily requirements.

In addition, the average well-fed person can store a supply of B12 in the liver (unlike other vitamins) that can last for five years or more.

But if you are a vegan (strict vegetarian who does not eat eggs or drink milk) or are a diabetic who is following the Beating-Diabetes Diet … which excludes eggs and dairy products and minimises your consumption of meat … you will need a daily supplement to ensure that your intake is sufficient.

Certain medications can interfere with your body’s ability to absorb or use vitamin B12:

Effects of a vitamin B12 deficiency

When the supply of vitamin B12 in the body is low, the production of red blood cells slows down as DNA and RNA become less available. This causes anaemia. The production of the cells that line the intestine is also slowed.

A lack of vitamin B12 can also seriously damage the nervous system. If the lack continues for a long time, the damages to the nerves can become irreversible.

The symptoms of a vitamin B12 deficiency

If you are only slightly low on B12, you may not have any symptoms at all.

The symptoms of a mild deficiency in vitamin B12 include … tiredness … weakness … loss of appetite … weight loss … constipation.

These symptoms can also be caused by other medical conditions and the underlying problem is not always easy to discern.

Very low levels of B12 can result in serious complications, such as:

Pernicious anaemia means you do not have enough healthy red blood cells. This deprives your cells of oxygen.

According to a study in the Journal of Oral Pathology Medicine less than 20% of persons with a B12 deficiency experience pernicious anaemia.

Paresthesia is a burning or itchy sensation of the skin, usually on the arms, hands, legs, and feet. Some people experience numbness, tingling, or a prickly feeling.

Neuropathy or nerve damage can be caused by prolonged deficiency in B12. The symptoms are the same as diabetic neuropathy (caused by high blood glucose over a long period) and include pain, numbness and weakness in the feet and hands (called peripheral neuropathy).

Severe, long-term B12 deficiency can cause loss of mobility, difficulty walking, memory loss, delusions, and depression. It may even lead to dementia.

Treatments for B12 deficiency

A lack of vitamin B12 usually results from your body’s inability to absorb it … not from a lack of B12 in your diet.

This means that people who are deficient in B12 must take large doses of supplements. In order to ensure absorption they need to take far more than they would actually need.

This is not a problem as there are no reports that vitamin B12 causes toxicity or adverse effects even in extremely large amounts. In fact, it is often used as a placebo because it is non-toxic.

Indeed 1,000 mcg of B12 a day is a common recommendation, sometimes starting with 2,000 mcg a day for the first month. These huge amounts, several hundred times the recommended daily amount, ensure that at least some of it gets absorbed, even without intrinsic factor.

Received opinion is that sublingual administration of B12 is thought to bypass the absorption problems related to intrinsic factor as it allows the vitamin to be absorbed directly into the venous plexus … the complex of blood vessels located in the floor of the mouth.

But there is no evidence that the B12 from letting a tablet dissolve under the tongue is absorbed better than swallowing. The efficacy of nasal gels is also unproven.

Pernicious anaemia is usually treated with injections of 50 or 100 mcg of vitamin B12 three times a week. As these go straight into your blood, they bypass the need for intrinsic factor. These injections may need to continue throughout life.

You need to ensure that you that you ingest adequate amounts of vitamin B12 and that your body can use it effectively: