Is there a link between diabetes and gout, that intense pain you feel in your joints? What is gout and how is it caused? And, if you are diabetic, what is the best way to treat your gout and avoid debilitating attacks?

If you have type 2 diabetes, your chances of encountering gout are higher than those of a non-diabetic. And vice versa … having gout boosts the likelihood that you will develop diabetes.

Gout is a kind of arthritis that causes a sudden swelling, burning and stiffness in your joints. The pain can be intense. 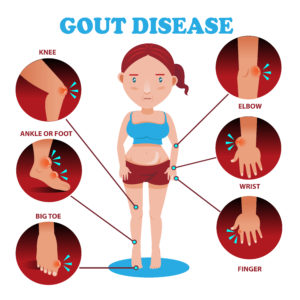 It usually shows up in the big toe first which may turn very red. You can also get attacks of gout in your ankle, knees and other joints. An attack can last for anything up to 10 days before the pain subsides.

And there can be long gaps, as much as several years, between attacks of gout. It is estimated that almost 85% of persons who have had an attack of gout once experience another episode within three years.

Gout is due to hyperuricemia, a build-up of uric acid in your bloodstream.

Uric acid is a waste product your body makes when it breaks down purines. Purines are a type of protein found in many foods and in all the cells in your body.

Uric acid normally dissolves in your blood, passes through your kidneys and is excreted when you urinate.

But the levels of uric acid in your blood can get too high if your kidneys are unable to remove it efficiently … or if you drink too much alcohol or eat too much of certain foods that cause you to produce excessive uric acid. 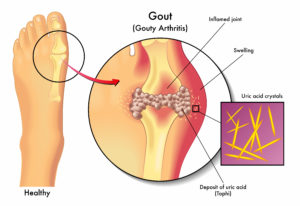 If the level of uric acid in your blood stays too high for a prolonged period, the acid forms needle-like crystals that get stuck in your joints or soft tissues. This causes the swollen, painful joints of gout.

Gout can run in families, perhaps because members of the same family tend to live similar lifestyles.

The link between diabetes and gout

A study published in The American Journal of Medicine in 2010 examined thousands of adults and their children. The researchers found that those with higher uric acid levels were more likely to get type 2 diabetes.

Another study published in 2014 in Annals of the Rheumatic Diseases found the connection between gout and diabetes was especially strong in women … women with gout were 71% more likely to get diabetes than women without it.

Other studies show that diabetes may play a role in the development of gout … and that hyperuricemia may make insulin resistance worse. Each condition adversely affects the other.

In addition, elevated uric acid is also seen in other medical conditions, not just gout.

People who have gout, for example, often also have raised cholesterol, raised triglycerides, high blood pressure and raised blood glucose levels. This makes it more likely that people with gout have or will develop type 2 diabetes, metabolic syndrome and kidney disease.

People who are obese are more likely to get gout compared to a person of normal weight because carrying extra pounds slows down your kidney’s ability to get rid of uric acid … 90% of persons with type 2 diabetes are overweight.

So it is no surprise that that about 50% of all those who suffer from gout are overweight. Central obesity (carrying too much weight around the middle) increases the level of certain inflammatory substances in your blood. This can exacerbate attacks of gout.

About 80% of persons with type 2 diabetes also have high blood pressure. High BP raises uric acid levels, the cause of gout. High BP is also linked to insulin resistance, the bane of type 2 diabetics. In addition, gout and diabetes are both linked to heart disease and kidney damage.

The link between gout and type 2 diabetes is certain and sure. The good news is that you can beat both using the same diet and lifestyle techniques you can use to beat diabetes.

How is gout diagnosed?

Your doctor will perform a physical examination of the affected joints. If these indicate gout, this can be confirmed by:

If the amount of uric acid in your blood is more than 415 umol/L (micromole per litre), you will be diagnosed as having gout.

How is gout treated?

To ease the pain during an attack, you should rest the joint. Taking an NSAID (nonsteroidal anti-inflammatory drug) such as ibuprofen or naproxen can also reduce the pain.

But do NOT take aspirin … it can raise the level of uric acid in your blood and make the pain worse.

To stop an attack of gout, your doctor can give you a shot of a corticosteroid (such as prednisone) injected into the affected joint. This can also be administered orally.

Colchicine is an age-old medicine for gout, first used in ancient Egypt for the treatment of rheumatism and swelling. It works by lessening the build up of uric acid crystals that cause pain in the affected joint. Colchicine is an alternative for persons who cannot tolerate NSAIDs.

At high doses, its side effects (such as gastrointestinal upset) limit its use. Lower doses, however, are well tolerated and are still effective.

To be most effective, colchicine needs to be taken as soon as an attack of gout starts. Indeed, even with other medications, early treatment is best and can mean that relief begins within 24 hours.

To prevent future attacks, there are two medicines your doctor can prescribe:

What triggers attacks of gout?

Everyone is different and what triggers an attack of gout in one person may not do so in another. Common triggers, however, include:

The best way to avoid gout developing or prevent attacks is to follow a healthy lifestyle.

Effect of alcohol on gout

Drinking alcohol can increase your risk of developing gout. It can also bring on a sudden attack if you are already suffering from gout.

Alcohol can raise the level of uric acid in the blood in a number of ways:

Recent research found that men who drink two bottles of beer a day on a regular basis are two-and-a-half times more likely to have an attack of gout compared to those who drink two glasses of wine a day. So if you must drink, drink wine (or spirits) rather than beer.

Thus, if you suffer from gout, you need to give up alcohol or limit your consumption to the odd glass on festive occasions.

Just losing weight can reduce the levels of uric acid in your blood, and the number of attacks you suffer.

Losing weight will also reduce the stress on weight–bearing joints, such as hips, knees, ankles and feet … the attack points for gout.

However, you should avoid crash diets … going without food for long periods … as a rapid loss of weight can increase uric acid levels and trigger attacks of gout.

The best way to lose weight safely is to follow a balanced, healthy diet coupled with some physical activity.

Drinking fluids reduces the likelihood of crystals forming. As a general rule, you need to drink eight large glasses of fluids a day (1.5 litres). All drinks, except alcohol, count towards your fluid intake, including drinks containing caffeine such as tea and coffee.

Caffeine can act as a mild diuretic, ie it makes you pee more often. However, regular tea and coffee drinkers develop a natural tolerance to caffeine and will only experience mild dehydration when they consume more than their usual amount.

Caffeine itself may have no direct influence on the risk of developing gout. Research has shown that coffee intake may be associated (in some people) with slightly lower blood levels of uric acid than those drinking the same volumes of tea.

As a diabetic you should be used to drinking plenty of water regularly.

How to use diet to beat gout

There are several things you can do to use diet to beat gout:

Studies have shown that men whose diet is higher in vitamin C are less likely to develop gout.

Studies also indicate that taking vitamin C as a dietary supplement (500 to 1500mg per day) can reduce the levels of uric acid in your blood. The vitamin C helps your kidneys remove uric acid from your body.

If you’re considering adding a vitamin C supplement to your diet and are taking prescribed medicines, you should check with you doctor to make sure that there is no adverse affect on the efficacy of those medicines. Also be aware that high doses of vitamin C can cause loose stools in some people.

Using sour (tart) cherries as a remedy for gout

Sour cherries, also known as tart cherries, are rather different than the usually sweet cherries. They are bright red in colour and retain their red colour even when juiced, frozen or dried. By contrast, sweet cherries are dark red or purple, almost black.

Sour cherries and sour cherry juice are used as a natural remedy for gout. Research shows that these cherries can reduce uric acid levels in your blood along with the inflammation that occurs with gout.

The only problem with sour cherries is that they deteriorate rapidly after picking so they are frozen or dried as quickly as possible. Thus the most usual way of enjoying them is as dried snacks, in smoothies, cereals bars and baked goods, rather than as fresh fruit.

Your body makes uric acid by breaking down the purines you ingest when you eat. Thus, a good tactic if you have gout is to reduce your consumption of foods that are high in purines.

Doing so requires some knowledge. Here is an overview:

[1] Foods high in purine (to be avoided) include:

So to reduce the uric acid floating around in your bloodstream, you need to avoid the foods in [1], and eat those in [2] in moderation. You can enjoy the foods in [3] as you will … except that, being diabetic, you must avoid dairy and eggs.

To beat your gout and avoid attacks, use the same diet as you use to beat your diabetes:

Just add extra vitamin C as a supplement, use dried sour cherries as snacks (making sure no sugar has been added) and make sure the foods you eat are low in purine or only contain moderate amounts.

In addition, you need to support your diet by exercising regularly.